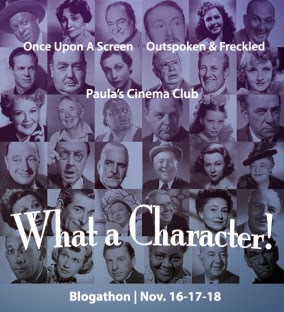 When I heard that Aurora (@CitizenScreen), Kellee (@IrishJayHawk66) and Paula (@Paula_Guthat) were hosting another 'What A Character' blogathon, I quickly raced to one of their blog sites and read the rules and looked at who had chosen which actor.  I was pleased to read that they were accepting entries for both classic and modern character actors.

I decided to write on Harry Dean Stanton, whom I've always loved.

I was amazed to read that Stanton was born in 1926 (making him 88 as I write this.)  He's appeared in a ton of films (over 100 according to the IMdB bio), many that I'd call 'important'.  Here's a very short list which incorporates some classics and some modern titles:

To me, one of the fascinating things about Harry is his appearance and 'style' of acting.  He has a disheveled look in a lot of the roles he plays.  His delivery is very natural, his face is unique...weathered.  His voice is smooth and low and he can burp out a string of curse words like nobody's business.

Recently, I watched the documentary HARRY DEAN STANTON: PARTLY FICTION (2012) ...it's available via streaming on Netflix.  I was amazed at how musical he is...playing harmonica and singing (a lovely voice at such an advanced age.)  I also learned in the documentary that he's never been married, struggled with his relationship with his mother and father (who divorced when he was a teenager) and he smokes a lot of cigarettes.

Let's look at his character in two of these modern films.  (And if you haven't seen either one of these, I'd strongly urge you to watch them.)

Believe it or not, this is one of my favorite films.  I used to watch this film once a week for a period of about a year.  So, I know the dialog pretty well!  (Hey, as a single 20-something...you have a lot of time on your hands.)  Stanton plays one of the leads here...so I'm cheating a bit by choosing this film.  But this film typifies the type of independent film and quirky characters that I love Stanton in.

Stanton plays Bud (in fact all of the repo men are named after beers: Bud, Miller, Lite, Oly.) Bud pulls Otto (Emilio Estevez) into a repo career and then the two become friends and partners at the 'Helping Hand Acceptance Corporation' (a play on GMAC, an auto finance company.)

Their relationship deteriorates over the course of the film, but by the end Bud asks Otto to join him for the trip of a lifetime.

A final note on REPO MAN: the soundtrack is great--especially if you love punk music.  Groups like Black Flag, Suicidal Tendencies, The Circle Jerks (and more) make up a great soundtrack.  Remember this film was written and directed by Alex Cox, who also wrote and directed SID AND NANCY (1986).

The only G-rated film directed by David Lynch (I'm pretty sure.)

I'm stretching the definition of 'character actor' again here because in this film, Stanton only has one scene, the final one.  And it's a beautiful scene between two brothers.  The story focuses on Alvin (played wonderfully by Hollywood veteran Richard Farnsworth) who is making a 250 mile trek from Iowa to Wisconsin on his John Deere riding lawn mower.  Why?  Because his eyesight is too poor and his legs are too weak to drive an automobile...and he's on a personal mission--to reunite with his estranged brother, Lyle who's recently suffered a stroke.

The film features a beautiful soundtrack and sweeping aerial shots of mid-west farmland.  And you can't help but love Richard Farnsworth's character.  The final scene when Lyle realizes the effort that his brother has shown in travelling to be with him is so touching.  Stanton does a lot of acting here with just his eyes, really amazing stuff for such a short amount of screen-time.

So, that's a wrap on Harry Dean...a modern character actor who has played a bunch of memorable roles over the years.  If you've never seen him in anything, I hope you will soon!

Posted by Joel Williams at 7:17 PM