Foreign Film Oscars from the 2000s

This is the fifth (and final) in a series of five blog posts dedicated to the 2013 '31 Days of Oscar Blogathon' hosted by the blogging divas Kellee (of Outspoken and Freckled), Paula (of Paula's Cinema Club) and Aurora (of Once Upon a Screen). 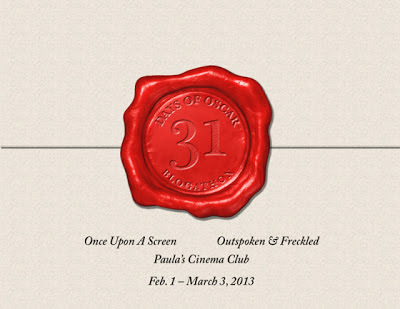 In this final post, just two films.  I'm going to examine the following Oscar nominated films from the 2000's:

CROUCHING TIGER, HIDDEN DRAGON (2000)
This is Ang Lee's best film (in my opinion.)  It's a wuxia film set in Qing Dynasty China, it has actors from many different nationalities and terrific martial arts sequences choreographed by Yuen Wo Ping.

Basic Plot:
Li Mu Bai (Chow Yun-Fat) is an accomplished swordsman late in his career looking to avenge the death of his master (his master was killed by Jade Fox.)  Meanwhile Governor Yu, his wife and daughter, Jen (Zhang Ziyi) are guests at Sir Te's estate.  Li Mu Bai's sword, the Green Destiny is stolen; he and Shu Lien (Michelle Yeoh) track it down, fall in love, and battle with Jade Fox.

Basic Plot:
A sheltered girl with a terrific imagination becomes a waitress at a cafe inhabited by eccentrics. Quirkiness ensues.

Posted by Joel Williams at 2:35 PM